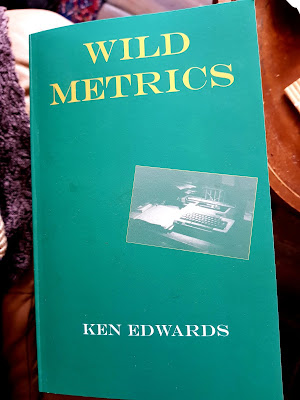 Wild Metrics is a marvellous read. In fact, I couldn't put it down. It not only entertained - it made me think and it's still making me think. It's an attempt to make sense of life by looking at its shapes as honestly as possible without distorting them. And it works because you're not even aware of what this book/ story / poem is doing. You're carried through by K and by Ken.

For those of us who lived through the 70s, it is a page-turner because you compare your experiences with those of K, the book's 'hero'. I'm not sure Ken Edwards would describe K as a hero although maybe he would. I certainly think of him as such. For those of you who are younger, it will be fascinating because it opens the door into a world of poets and other artists, not the mainstream, but people who knew they were on the edge of things and who knew that that's where they wanted to be - in a position to question and to challenge.

I sidled nervously up to this book because I thought it was going to be 'experimental' and for me, that means 'difficult to read'. As with John Cage's music, I feared that I was going to fail at the crucial point. I don't mind listening to John Cage (although he's not my favourite) - until it gets to his silences which are supposed to be the most important parts. And I like the thought of them. But only the thought of them. I don't like the actuality. But this book is not like that. This book has a shape that wraps itself around you and carries you along. For me, it is mainly memoir-shaped and it has observations and images that stick in the mind. And questions.

The Grand Iota Press promised that it was 'dedicated to imaginative prose writing..... books that are hard to categorise but good to read.' Well, that turned out to be true and the fact that I'd met Ken briefly and liked both him and his music gave me hope that I would like the book. And then Carol Dennard (of the Bookkeeper bookshop) mentioned that she was reading Ken's book and enjoying it. Duly encouraged, I jumped in.

My first impression was surprise. It was easy to read. Very enjoyable. Ken had turned into K and although I had to block images of Kafka's K from my mind (because my memories of Kafka's K in The Castle were frightening), it was easy to do and then Ken's K could create his own atmosphere. Which he did. I realised later on that Ken had probably chosen 'K' because of these associations i.e. not only with himself but with Kafka's K, too (although I may be wrong, of course).

The main part of the story (apologies to Ken here because towards the end, he categorises this book as a poem and of course, it can be experienced like that)  deals with his life from approximately 1974 - 8. It's the tale of life in London, writing and publishing poetry, meeting writers, going to poetry readings and managing to exist on very little. He lives in shared houses, gets odd jobs, signs on.  Has girlfriends, loses them and finds them again. Forms friendships. Goes for a few months to the USA to tutor a rock star's daughter.

The thread is K's life, overlaid with poetry.

I was particularly interested in reading about his life during those years because there were so many points of contact and contrast with my own life in Leeds. I was bringing up a child, teaching part-time and although I thought I was well-read, had not heard of many of the poets K mentions. K says near the end that most of the poets were men and although female poets were encouraged, there were hardly any of them. That was true in Leeds, too. My best friend, Tessa, loved poetry and we went to listen to poets but never thought of submitting our own poems anywhere and nor did any of the other women we knew.

During the 70s, the poets I read were the ones that were, I suppose' 'on the other side of K's line', the establishment poets, although I never thought of them like that at the time. I liked Ted Hughes and Yevtushenko (and still do). My experience of poetry was haphazard. I liked the Liverpool poets and remember going to listen to Adrian Henri reading his poems to jazz. I'd never heard poetry like that before and thought it was marvellous. I went to listen to Zephanaiah at the Leeds Trades Hall and was aware of Linton Kwesi Johnson but I never met those people. What was notable about the Zephaniah concert I remember was that the audience was almost totally white. So far as I could see, there were only five black people present. But K knows so many poets and talks to them, corresponds with them. Ken Edwards knew them personally.

K takes us with him on his stint to the USA as tutor to a rock star's daughter and the emptiness of the glamour as well as the irritation he feels later when people are interested in him because of his association with the famous person rather than in him personally is easy to understand. He learns something and the reader does, too.

All this is interwoven with life in shared houses, cleaning, cooking, rent difficulties, people passing through who are struggling with their own lives.

Ken is careful to hold us gently when we reach the end of the '70s narrative and switch to 2019 life in Hastings and he makes sure that we know that 'the end' is not the end but it is the end of the book. We are left with the sound of Elaine's saxophone and Ken's bass guitar with an ongoing life that is interesting and fulfilling while the sea laps gently at the edges of the St Leonard's shore. The wild metrics are still working.

Novel by Eliza Quancy - On the Slow Train 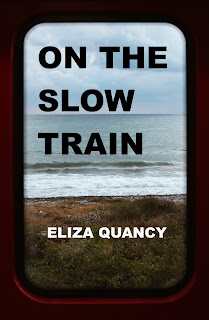